What is it all about? 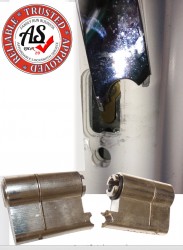 The standard euro cylinder lock which secures the vast majority of homes in the UK and Ireland have a major weakness, this can allow a burglar to gain quick and quiet access within 15 seconds

This weakness has been known by Locksmiths, door manufacturers and the police for many years. A prominent locksmith went public in the newspapers in 2006, as did a West Yorkshire Police Inspector in 2009, due to the rising occurence of burglars using this technique “Lock Snapping” has become the preferred method of attack against many homes. Recent BBC and ITV reports have highlighted signi. cant increases in this method. Police Crime statistics indicating it is used in over 30% of burglaries in some areas

How is this Possible?

The principle of “Lock Snapping” is simple - apply enough force to the cylinder and it will break at this weak point as shown in the picture to the right. Once broken the burglar has access to the internal workings of the multipoint lock and within a few seconds can open the door. What is it all about? Sacriffcial cuts alone are not enough.

What should you do?

Protection against lock snapping is possible.

For example, many locks that only have sacriffcial cuts still break in the centre when force is applied.

Incorrect selection of product and / or poor fitting can seriously compromise the security of your door, many kitemarked locks o. er no protection against lock snapping. Steel cores offer real resistance against attack.

A.L.S. Locksmith Glasgow can advise on the best type of lock for your individual situation and also advise you if security devices are needed in other vulnerbale areas such as patio doors, etc.